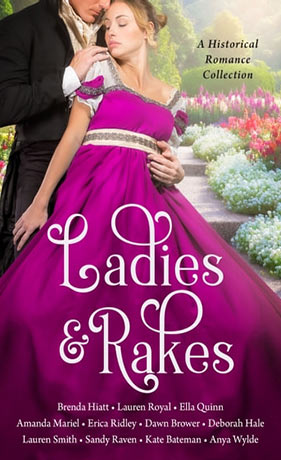 From sweet to sensual, Ladies & Rakes, contains over 3000 pages of Historical romance. It includes 12 novels by 11 authors including New York Times and USA Today best-selling authors.

Lauren Royal: Tempt Me at Midnight
Lady Alexandra Chase has always done what was expected of her. But when the man she’s loved since her girlhood returns from a long spell abroad, she quite suddenly finds herself hoping the fine lord her brother has picked for her won’t propose...

Brenda Hiatt: Gabriella
A duke loses a wager but wins a treasure when he’s forced to bring a pretty nobody from the country into fashion during the London Season. Particularly when he discovers the two have more in common than he ever could have guessed!

Erica Ridley: The Captain's Bluestocking Mistress
Spinster Jane Downing wants off the shelf and into the arms of a hot-blooded man — Specifically, the dark and dangerous Captain Grey!

Amanda Mariel: A Wallflower’s Folly
Lady Olivia Montague's betrothed has ignored her and their contract for years. In the meantime, she has decided to remain unwed, embracing the life of a spinster. The last thing she expects is for her betrothed to come storming back into her life.

Dawn Brower: When an Earl Turns Wicked
Jonas Parker, the Earl of Harrington has no desire to marry. He rather enjoys being unencumbered and a wife would complicate things. His club is his haven and he isn’t ready to give it up for matrimony. Lady Marian Lindsay wants to be a physician. She devises a scheme that is foolproof, but she needs Harrignton's help. Jonas is appalled at Marian’s request and refuses; however, she manages to charm him into saying yes. Before he realizes it, he’s escorting her to a house party made of his worst nightmares. Propriety must be met at all costs, because he will not be wed at the end of her expedition...

Lauren Smith: Wicked Rivals
A Scottish widow and an English lord compete in the realm of business and soon their rivalry ends up in the bedroom where passion ignites a fiery romance between them.

Kate Bateman: To Steal A Heart
A master spy and a beautiful thief find love and intrigue in each other’s arms. When tightrope-walking thief Marianne encounters France’s most notorious spymaster, he makes a wicked proposition. . .

Deborah Hale: Scandal on His Doorstep
Annabelle is the only woman Jack Warwick trusts to help him care for an abandoned baby who might be his daughter. But can Annabelle ever trust the man who once broke her heart?

Ella Quinn: One Duke or Another
She was perfect for him. Now, all Guy Paulet, heir to the Bolton dukedom, had to do was convince Lady Aglaia to jilt his uncle, defy her father, and marry him in less than a month. After all, she absolutely could not be allowed to marry a man who had murdered his four previous wives.

Ella Quinn: It Takes a Hero
For the former Anna Calder of Tortola, discovering she is the Duchess of Wharton is a shock, but being forced to find a husband is a greater one. To make matters worse, the only gentleman who interests her is the devastatingly handsome rogue she has been warned against. As inappropriate as he is, she can’t stop thinking about the way his blue eyes warm her or cut of his coat over his broad shoulders...

Sandy Raven: Fated Love
Three daughters attend what turns out to be an intimate house party, and soon all three fathers are giving their daughters in marriage to three extraordinary young men—hopefully to produce the next generation for their families.